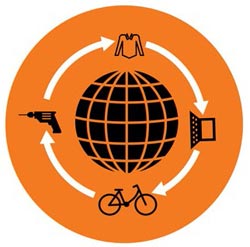 One of the most exciting trends in the web startup world—for me, at least—is the growing number of companies in the so-called “collaborative consumption” space. These companies are using technology to reinvent market behaviors that are as old as human civilization itself—sharing, bartering, and trade.

Let’s get specific: I’m talking about tools that let you share your car with your neighbors (Getaround, Zipcar), tools from your garage (Streetbank), or your couch or guest bedroom with visitors from around the world (Airbnb, Couchsurfing); tools that let you raise support for your next venture directly from your customers (Kickstarter, Indiegogo); online markets for handmade or restored goods (Etsy); tools that revolutionize education by enabling experts outside the university to teach courses online (Skillshare).

However, I’m also talking about modern versions of more traditional tools for participating in the market, that focus more on the local trade, and empowering the unemployed or underemployed: tools for hyperlocal buying and selling (YardSale, Krrb, Zaarly); tools to find and hire trusted locals for odd jobs, or to get hired for piece work (TaskRabbit, Exec).

What all these companies have in common is that they are in the process of disrupting the centralized global market, making it more democratic and decentralized by giving us tools to operate on a peer-to-peer basis. It’s an acknowledgment of the fact that there are a lot of creative, talented people sitting on the sidelines of this economy simply because a system hasn’t been designed to properly include them. It’s a reflection of the weak economy in the wake of the 2008 financial crisis, and the average family’s need to make their dollars stretch further. It’s also partly a reflection of a growing cultural rejection of individualistic consumer behavior, driven by mainstream advertising, that has been at the heart of the American economy for decades, and the desire to return to a more authentic, connected, way of life. It’s incredibly exciting to see the growth in the adoption of these apps. I believe we are at a tipping point that will ultimately bring us out of the economic collapse of 2008 and yield a more vibrant, resilient economy and stronger communities.

The rise of online social networks has broken down the psychological barrier to sharing information about ourselves online. People who ten years ago were hesitant to post pictures of themselves online and tell the world about themselves, their work, and their hobbies, now do so without a second thought. We now use these social networks not only to communicate with friends and family, but also with the community at large and even with people all over the world. It turns out, people want to share. These social networks, whether they exist in their current form ten years from now or not (most likely not), will form the foundation of this new economy, one based on trust and authentic relationships between producer and consumer, and not just faceless transactions.

One aspect of this new economy I’ve been thinking about lately is the crucial role that reputation and trustworthiness will play. One of the things Pierre Omidyar, the founder of eBay, was most proud of, was the fact that his company largely pioneered online trust and reputation by making its feedback and rating system a core part of the user experience. We might look back on it now as a relatively crude mechanism, but the implications were profound. Think about it: people started trusting random strangers around the world enough to send them goods through the mail before receiving payment, a fairly uncertain outcome at the time. The early eBay community was made up of trustworthy individuals that operated in an open, authentic way that engendered trust. Nowadays, eBay has lost the spirit that infused the early community, as it built features designed to please “power sellers”, essentially destroying the person-to-person authenticity and turning it into an automated impersonal experience. What we will need to grow the new sharing economy is a similar, but more comprehensive, measure of reputation that tells you at a glance if the person you are dealing with is trustworthy. This will likely be an aggregation of activity in various areas of your life, both online and offline—a kind of “karma score”. I’m keeping my eye on a company named Legit that’s working on just that.

Chico is full of creative, talented people with a wide variety of skills. Our community values regional self sufficiency and has a spirit of kindness and generosity that we are rightly proud of. If you’re interested in this subject, or have ideas about how to further the sharing economy in Chico, or anywhere else for that matter, send me an email—I’d love to talk to you.