Hello, My Name is Chico, And I Have A Drinking Problem 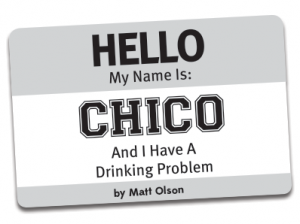 Mason Sumnicht, a pledge to Sigma Pi at Chico State, died on November 15th after a night of heavy drinking at local bars. He was celebrating his 21st birthday by drinking 21 shots with the help of his fraternity brothers. His life ended with severe brain damage and 12 days of life support in the hospital. The tragedy of the loss of a young man with his whole life ahead of him cannot be overstated. Unfortunately, such a tragic event is not as uncommon in Chico as it should be. This was the fourth alcohol-related student death in the fall semester—Shawn Summa, Brett Olson, and Carly Callaghan all lost their lives in the last four months.

These are just a few of the highest profile cases in recent months, but the list goes on and on—drunk driving, hazings, sexual assaults, rapes, drownings, alcohol poisonings, stabbings—crimes related directly to the high rate of alcohol consumption by students and the community at large.

Chico has long cultivated a party culture, and if you look at our history, we go through cycles of increasingly uncontrolled behavior followed by public outcry and attempts to moderate it. There’s Pioneer Days, an annual week-long alcohol-fueled bacchanalia where anything that could happen, did. Playboy dubbed Chico State America’s #1 party school in 1987, and that year the parties led to full-on riots, complete with street fires and overturned cars. The President of the school at the time, Robin Wilson, met with local officials, who agreed to shut down the event with police force, famously saying that he “took it out back and shot it in the head.” Then there’s the 2008 riots, when Chico Police attempted to break up a party at 6th & Cherry, and students retaliated and rioted downtown. Then there’s Halloween, which used to draw tens of thousands of people from all over the state for a massive street party, which then devolved into increasingly violent behavior until the festivities in 2001 saw four stabbings, 36 assaults (two sexual), two dozen car accidents and various acts of vandalism. This was followed by a crackdown the following year composed of 400 officers from across the North State, many on horseback, phalanxes of police walking the streets in groups of six to ten, DUI checkpoints, helicopters, and in later years advertisements run statewide featuring cops rounding up revelers and menacing voices saying “The party is over”.

Why the history lesson? This writer believes we are about to experience another crackdown. It’s not a very bold prediction. The President of the University, Paul Zingg, has already suspended the fraternities and sororities on campus, refusing to reinstate their charter until they agree to some yet-to-be-determined restrictions. In addition, he and other community leaders have published a call to action asking for everyone to work together to moderate alcohol consumption in Chico.

This is clearly a multifaceted issue that does not lend itself to a simple analysis or a single point of blame. Part of the issue, clearly, is that some students come to Chico State specifically because they want to party. It still has a reputation as a party school, despite the restrictions put in place since the ‘80s. Surveys show that 35% of incoming freshmen report participating in binge drinking during their senior year of high school, significantly higher than the national average of 22%. Once here, students report feeling pressure to drink heavily, and the culture created on campus, and to some extent throughout the community, certainly contributes to that.

It shouldn’t be surprising that students predisposed to heavy drinking, immersed in a party culture, in a town where cheap alcohol is everywhere, will get themselves into trouble. The question is: what responsibility, if any, do the institutions and businesses we set up—the University, the City, downtown bars and clubs, and the community as a whole—have in helping students avoid truly dangerous situations, whether it be alcohol poisoning, hazing, or sexual assaults? Does it actually help to set up new rules and regulations, or will lasting change only come with a shift in culture?

I’ve spoken with a dozen or so individuals, everyone from long-time residents, to students, to downtown bar owners, and I’m an ideas guy, so please allow me to synthesize these discussions into a few ideas. Hopefully this will stimulate further discussion and community resolve around achievable change.

You must renew your commitment to brotherhood. Pressuring a brother to drink dangerous volumes of alcohol is a betrayal, as is providing alcohol to a brother once he has exceeded his body’s tolerance. Nobody wants to kill your party, but certainly a good time can be had by all without anyone dying. Take the time to learn the very real limitations of the human body and to detect dangerous levels of intoxication. You have a moral obligation, and if you don’t meet your responsibility, your charter will be revoked.

Your primary role is one of education. Require a comprehensive health and safety course for all new students (freshmen and transfers) surrounding issues of excessive alcohol consumption, interactions between prescription pills and alcohol, and sexual assault prevention. Ensure that it’s interesting and fun so students actually want to attend and pay attention. Invite community members, bartenders, and former students who have dealt with the consequences of alcohol abuse to present their perspectives.

Erect a memorial in a prominent location to all those we’ve lost to drug and alcohol abuse. There is very little institutional memory among the student population. The high turnover rate means that new students don’t necessarily appreciate how dangerous excessive alcohol consumption can be. This constant reminder/buzzkill will help to counterbalance the pull of the drinking culture.

You should bring local bar owners into the discussion. Notably missing from your call to action are the names of any local bar owners. I met with five who said they were never contacted or consulted prior to its publication, but would have welcomed the opportunity to participate in the discussion. I think you’ll find some unlikely allies if you approach the issue in a balanced way.

The fact that 35% of incoming freshmen are already binge drinkers points to a glaring lack of parental guidance in the lives of these young people prior to their arrival. Parents must take an active role in discussing the dangers of excessive alcohol consumption. We clearly need to get the message across a lot sooner than we have been. Rather than burying your head in the sand and hiding behind blanket prohibitions, we need to realize that kids are getting into stuff earlier and earlier. Here in Chico, parties with alcohol are happening as early as middle school. Parents clearly have a huge role to play in monitoring their kids and talking about alcohol early and often, right alongside discussions of drug use (including prescription pills) and safe sex.

You have a moral and legal obligation to bounce underage kids and to look all of your customers in the eye and cut them off if they’ve reached their limit. If you provide alcohol to someone that is clearly wasted, you have crossed the line from service provider to predator. The vast majority of Chico’s bar owners recognize this, and operate honest, legal businesses and take their responsibility seriously. However, some are playing fast and loose with their licenses—Riley’s served ten shots in 75 minutes to Mason Sumnicht the night he was hospitalized. Clearly, they fell short of their responsibility to cut off overly intoxicated customers that night.

You are not simply a small business meeting the demands of the market. Yours is a special case, where your customer’s demand may or may not be genuine. The first few might be, but as someone gets progressively hammered, their judgement has been compromised and you have an obligation to moderate their otherwise dangerous behavior. You are also in some cases dealing with a complicated group dynamic that is encouraging excessive consumption. Your role is to know when to serve and when to stop serving. It’s probably best to serve smaller quantities so you can keep an eye on things—serving pitchers of vodka is not going to give you the level of granularity you need.

Passing new laws or regulations is unlikely to have any effect. You don’t have the staff to enforce them! It is entirely likely that your attempt to further regulate alcohol consumption will have unintended side effects. One might argue that shutting down Pioneer Days, Halloween, and St. Patrick’s Day and forcing downtown bars out of business has simply pushed the problem elsewhere—to house parties that are completely impossible to regulate. We have plenty of laws already—your challenge is to find the resources to enforce them.

We all have a role to play in engaging University students, bringing them into the community, and offering constructive channels for their youthful energy as an alternative to constant partying. This will not only help moderate dangerous levels of alcohol consumption, but can also serve the long term interests of students and the community at large. Let me explain.

The economy is in pretty sore shape. We all recognize the need to revitalize and grow local business. We have a student population that for the most part comes here from other areas, parties hard, and leaves in four years, with very little long-term benefit accruing to the community. We ought to be able to pick the best and brightest among them and recruit them to stay here, start businesses, and help our community prosper. We can do this by creating an incubator for startups composed of the most talented and driven students, supplemented by experienced entrepreneurs from the community. For example, if we want to grow the web/mobile software sector in Chico, we incubate companies composed of Computer Science, Communication Design and Business students, with mentorship, support, or possibly leadership from those in the community with relevant industry experience. This would not only give students valuable experience starting a company while in college, but hopefully would help them establish long-term roots in Chico and grow our local economy.

These are just a few ideas. We at the Synthesis hope to engage the community in depth on this issue over the course of the next few months, and facilitate an ongoing conversation that will hopefully remain constructive and focused on achievable change. Please contact us with any insights or ideas you have on this very important topic.