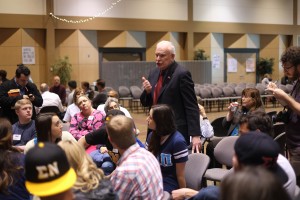 Four hundred people representing virtually every part of the Chico community attended a gathering on the Chico State campus last Friday to collaborate on actions we can take to change Chico’s increasingly out-of-control drinking culture. Attendees ranged from the Chico State and Butte College student bodies, fraternities and sororities, parents and University officials, to members of the Chico City Council, Chico Police and EMTs, to downtown bar owners, retail sellers of alcohol, apartment building owners, as well as a healthy dose of average Chico community members like me.

We were greeted with a seating arrangement of large, concentric ovals, immediately giving off a collaborative feel rather than a lecture hall. Paul Zingg, the President of Chico State, set the tone by saying “action without understanding has no meaning. Understanding without action has no consequence. We’re talking about trying to understand and to act in a meaningful and consequential way to address issues that connect us. We’re not here to wring hands in frustration and desperation. We’re not here to wag our fingers and lecture, and we’re certainly not here to point our fingers in blame. We are here to connect, and communicate, and commit.”

After the introductory speeches, we were introduced to a professional mediator brought in to facilitate the conversations. I must admit, I was skeptical at first. She had a serious hippy mediator vibe and used a lot of fuzzy language. She introduced us to what she called “open space technology,” which is like the Montessori of meeting formats, as in, this is your meeting, follow your passion. It starts with anyone and everyone proposing a topic, getting up and giving a one or two sentence introduction to their topic, and posting it on a giant bulletin board of sorts. I was surprised to see so many people jump up and propose topics for discussion. There was so much passion and interest in this topic and everyone seemed to have ideas to bring to the table. Some in attendance scoffed at the proposed methodology at first, but in the end, it worked beautifully, and I think everyone felt like they had their chance to be heard.

There were three sessions in all, with each session divided into several breakout groups discussing a given topic. Topics included “Why should the University recognize frats at all?”, “The role of the media and advertising”, “How can local business help?”, “Early intervention in K-12 and the importance of parental responsibility”, and “Alcohol and sexual assault”. Each of these discussions was vibrant—full of intelligent ideas and well-informed, respectful dialogue.

I was most interested in hearing from students. I believe any true change in student culture must be driven by the students themselves. I’m not 18 anymore, but I remember well that this is an age defined largely by opposition to parents and authority figures. Nobody likes being told what to do, but this is especially true when you are in college and forging your identity.

Of the students in attendance, the majority seemed to be either from, affiliated with, or defending the fraternities and sororities. Numerous sulking frat dudes wore their letters and sat with bored expressions and arms crossed, unhappy at having to deal with what has become an existential crisis. The Greek system has been suspended since last semester after numerous accounts of hazing at several fraternities, and the death of Mason Sumnicht, a pledge to Sigma Pi, after a night of heavy drinking on his 21st birthday. They are to be reinstated next month if they agree to a set of strict guidelines to prevent violence and alcohol abuse. One breakout session was led by a community member that asked why frats should be recognized by the University at all. His main point was that this is a relatively small percentage of the student population that is directly or indirectly involved in a disproportionately high percentage of dangerous situations, such as alcohol poisonings, brutal hazings, and student deaths. This naturally drew an audience consisting largely of fraternity and sorority leadership and membership, in which they attempted to persuade us that they do a lot of good, raising money for charity and so on. They attempted to deflect by saying that technically their houses are dry, and that they don’t throw parties where alcohol is served. I’ll leave it up to you to decide if you believe that or not. At one point, Paul Zingg joined the conversation and had a poignant declaration: “Be who you say you are. There are no more second chances. This is it.”

There were other bright students in attendance who brought a fresh perspective. Liza Worden, from the student groups CAVE (Community Action Volunteers in Education) and SAVE (Students Against Violence Everywhere), sat in on the breakout group dedicated to how local business can help. She said, “One of the first things I did when I came here was to get involved with volunteer work in the community. I felt like ‘oh wow, I belong to this community, there are adults out there that care about what I’m doing and appreciate what I’m doing.’ That very first connection made me feel like Chico was my home, rather than just a place where I’m going to school. Whether it be volunteer work, or recreational activities, or feeling connected to a certain business or entity in the community, or an actual internship or job (which would be prime for the students) that’s the best way to get them invested in the community and feel like this is their home.”

I couldn’t agree more. We need a much deeper integration between the Chico business and arts communities and the student body, providing not just internships where they are treated as free labor, but long term mentorships. This not only provides productive channels for youthful energy that might otherwise be put into a night of drinking, but it provides a deeper connection and incentive to stay in Chico, growing the local economy and building a virtuous cycle of creative energy.