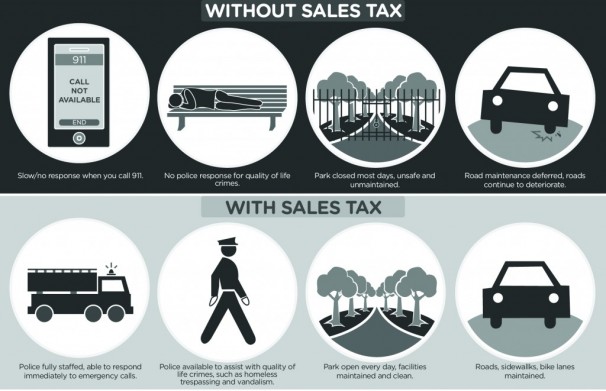 The Chico City Council has begun a series of excruciating budget cuts in response to deficits and long-term debt levels of immense proportions. According to the new City Manager, Brian Nakamura, who was brought in last year to clean up our budget mess, “this probably is the darkest time for the city of Chico.”

Facing a $4.8M budget deficit and $24M in debt, the Council in June approved a new budget that laid off dozens of city employees including 19 positions in the police department, drastically cut capital improvement projects, reduced hours for park access and cut park staff and facilities, put essential maintenance services on hold, forced rolling closures of fire stations, and generally engaged in a full scale slash and burn operation.

The response to our budget crisis was one-dimensional, and demonstrated a lack of political courage to forge a balanced solution. Mr. Nakamura, in his characteristically cautious (yet sanguine) fashion, framed the discussion for the June budget discussion, saying “there are only two ways to build a healthy community, and that is to grow the community, financially, responsibly, and also make the necessary reductions we need.” To most of us, that kind of comment is fairly inscrutable, but he was essentially giving a nod to the prospect of bringing in additional revenue, but only by growing the tax base, not the tax rate—more taxpayers, not higher taxes. Short of that, we must slash services.

In the September 17th Council meeting, it was revealed that the budget for Fund 400 (the capital improvements fund) was an additional $700K in the hole than previously thought. This, of course, will mean further staffing reductions to cover the shortfall. Later in the meeting, in light of this revelation, Mr. Nakamura withdrew his request to recruit for two staff positions that had already survived the budget cut: the City Engineer, and an Economic Development Manager. This was an especially ironic turn of events, given that economic growth is key to his long term plan. He explained, “difficult as it may be, and understanding that one of the Council’s goals is economic development, which is the revenue side, which is very critical I believe, meaning increasing our tax base—not increasing taxes[!] but increasing our tax base, property taxes and sales taxes—it’s critical that we have the opportunity to forge economic development partners and opportunities. That said, given the recommendation for staff reductions, it’s very hard to move forward with recruitment for these positions.” Essentially, we’re only going to consider revenue by growing the tax base, but the city is abdicating any input it might have into the process by failing to hire an Economic Development Manager.

The path we are on now is frightening, the beginning of a long period of economic stagnation, and doesn’t at all match the vision most Chicoans have for our home. We don’t want to live in a place where the police force is chronically overwhelmed, understaffed, and unable to respond to calls for help, where stabbings are on the rise and there is no adequate response, where large areas of the city go without any protection. We don’t want to live in a place where the crown jewel of our city, Bidwell Park, is closed, goes unmaintained, and becomes unsafe and inhospitable. We have aspirations for our city, to live up to our reputation as the beautiful, welcoming, fun place it has always been, a great place to raise a family, a compassionate community that looks out for each other, a place with awesome recreation opportunities and a lively downtown. Fortunately, some of these things are due solely to the people that live here and our strong sense of community. But we also need to make ongoing investments in common infrastructure to lay the groundwork for the quality of life we are used to.

There is an another path we could choose, one that will allow us to restore essential services, increase public safety, and promote smart growth. It’s something that 142 cities and counties throughout the state, including many smaller than our own, have already done to shore up their finances and provide the services their citizens demand: pass a local sales tax.

Currently, the state collects 7.5% on all purchases and distributes 1% back to the city or county where the sale was made. Chico collected about $17M through sales taxes last year, about 40% of total revenue. With a modest half-cent sales tax increase, the city would collect an additional $8M per year, more than enough to restore previous service levels, and even add more police officers (which they needed prior to the cuts). This funding would also allow us to restore fund imbalances to their target levels within a few years. It is baffling to me that this has not been championed (or even mentioned) by any sitting City Council member as part of the solution. This is the only way for us to maintain essential services and the quality of life we want in our town, and yet the path they chose is based purely on austerity, even at the risk of endangering the public.

Of course, in order for us to trust the Council with these funds, they must come clean about the financial abuses of the past. Clearly, with the ongoing revelations about Fund 400, there has been some level of fraud and/or serious negligence on the part of City staff and perhaps complicity on the part of some Council members (past or present). We need a full investigation, and to hold guilty parties accountable for betraying the public trust. The Council are our representatives and they should be much more assertive about demanding financial accountability and efficiency. No longer can they blame staff for everything, when the entire nature of their job is oversight in the public interest.

We deserve better, Chico. Let’s all chip in a little to save our town, attract and retain innovative companies and smart people, and take pride in our home once more. Here’s how we get it done: call up your council member, inform them that they have the power to put a measure on November 2014 ballot for a local sales tax, and that you are willing to chip in to save our town. Tell them that if they won’t do it, we will do it ourselves by ballot initiative and vote them out of office.

If you want to be a part of the solution, please visit Together Chico to learn more and take action.